When Angus offered me the opportunity to join this operation, I was baffled. I mean, a craft brewery? I’m a white, college-educated male between the ages of 25 and 35 – what do I know about craft beer? I’ve got the disparaging condescension towards commercial beers on lock, but I don’t own a plaid shirt or a beard. Angus, however, wasn’t taking “no” for an answer, mostly because he didn’t ask a yes-or-no question.

Angus is confident in me. He has a remarkable ability to find your hidden talents buried beneath layers of plaid and beard. During our initial brewery talks, Angus said something that sticks with me to this very day, three weeks later: You’re good at making people drink. My therapist agrees.

And then there’s Doug, whose hair alone could run the brewery. He finds inspiration in the most unusual places, like inspirational quotes. I love Doug like a brother, and if his brewing skills are half as impressive as his cooking skills, we’re all in for a treat. One time, Doug put red onion in my salad. In my salad! That’s exactly the kinda out-of-the-box thinking we need.

Craft brewing is not solely my destiny; it’s my only option, which I’ll illustrate with an obligatory anecdote.

Months ago, I had an online interview with a start-up company in Calgary. It went poorly. Not as poorly as, say, my Disney World interview, where I said my favourite Disney character is the Coachman who turns kids into donkeys. Nor was it as bad as my Rolls-Royce interview, where I accidentally tied up my hands and wrists with Scotch tape. And it certainly doesn’t top my Royal Military College interview, where I said that gravity is a form of aerodynamic drag, then yelled, “FUCK!” …But it was poor.

This interview consisted of none of the usual pleasantries, like what I do and why I’m decent at it. No, they jumped right into undergraduate-level technical questions – 17, to be exact – including solving problems and using equations I haven’t touched since Kofi Annan led the UN. And the only reason I’m aware of that historical trivium is because of Wikipedia, which I had open on my computer monitor during the interview to aid with their technical questions.

When I’m nervous, I crack bad jokes. Judging by the deafening silence I was met with, I surmised that these guys weren’t the type to laugh at humorless jokes, nor were they the type to let me slink away with what little dignity I had left. The interviewers asked me to draw a close-looped, steam-generating system with Microsoft Paint via screenshare so they could silently mock me in real-time. Below is my masterpiece, worthy of the Louvre.

Against all odds, the interview got much, much worse. After I closed Microsoft Paint, the interviewers went silent for a solid 15 seconds. I had forgotten that the screensharing program was still running and, subsequently, they could still see my computer screen. Below is a screenshot of what they were staring at. In case it’s not enough that I was cheating during the interview by searching for answers to the technical questions on Google, check out the tab at the top left.

Two days later, they offered me the job. I can only assume the other candidate had pornography open on his monitor.

Yeesh. I’m two minutes into my Marketing job and already embarrassed by my facetiousness. On the other hand, maybe that’s the secret to all this. Maybe the key to marketing is being open and honest, embracing and celebrating all the eccentricities embodied by the human condition. Art is subjective. Dignity is overrated. Perfection is a fallacy. But in my book, beer is about as close to perfection as we can get. And that’s worth pursuing. 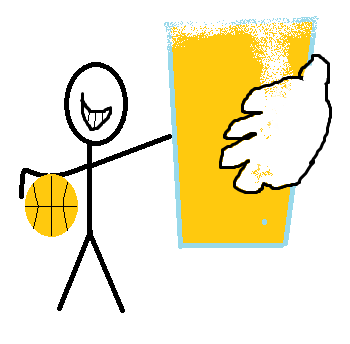 Subscribe to our monthly Brewsletter,
THE GOOD TIMES, to stay up to date with beer releases, events, and gossip!